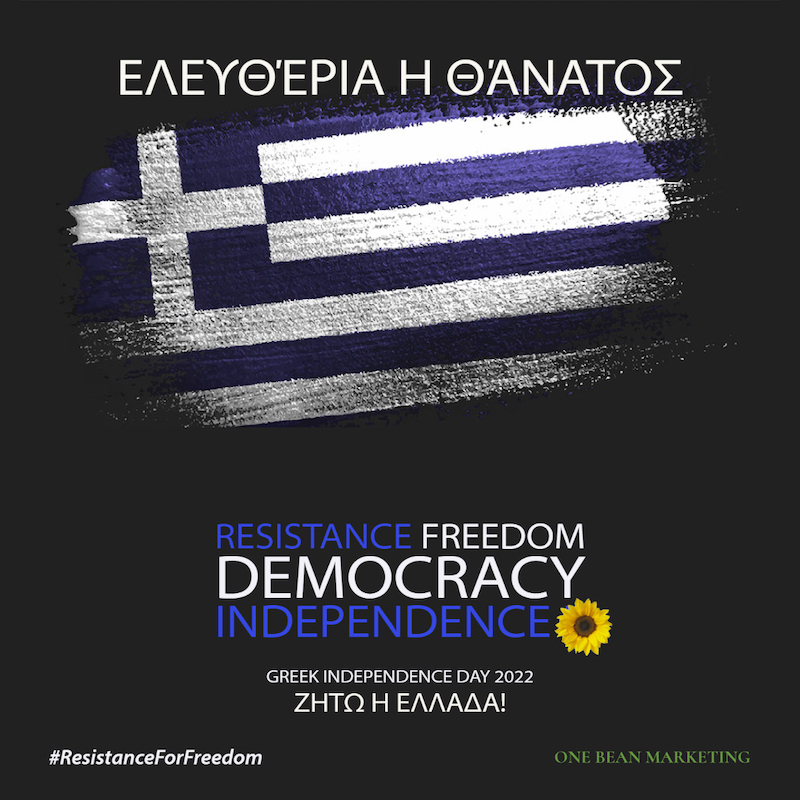 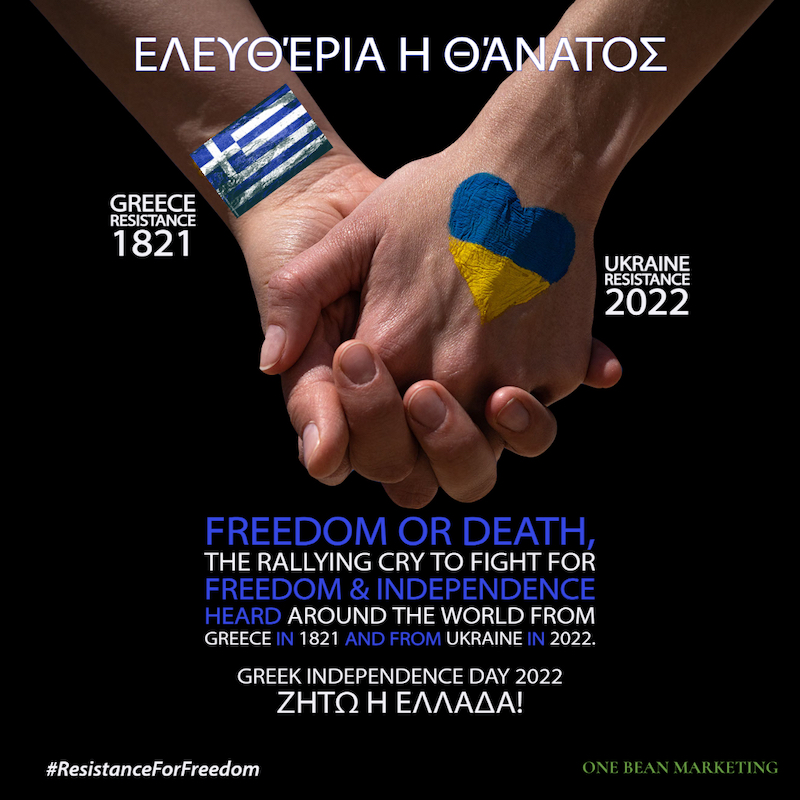 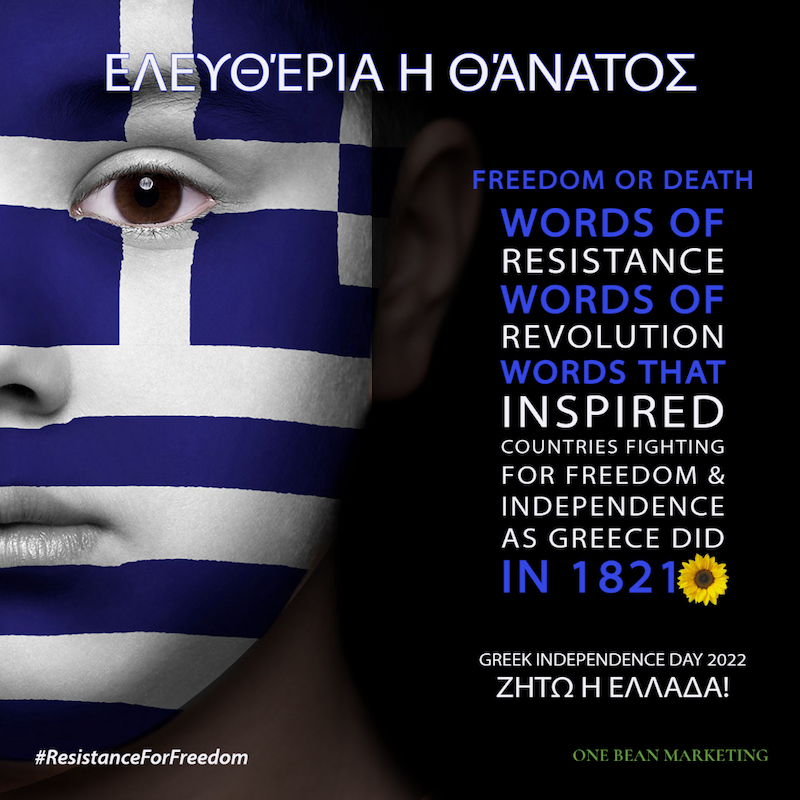 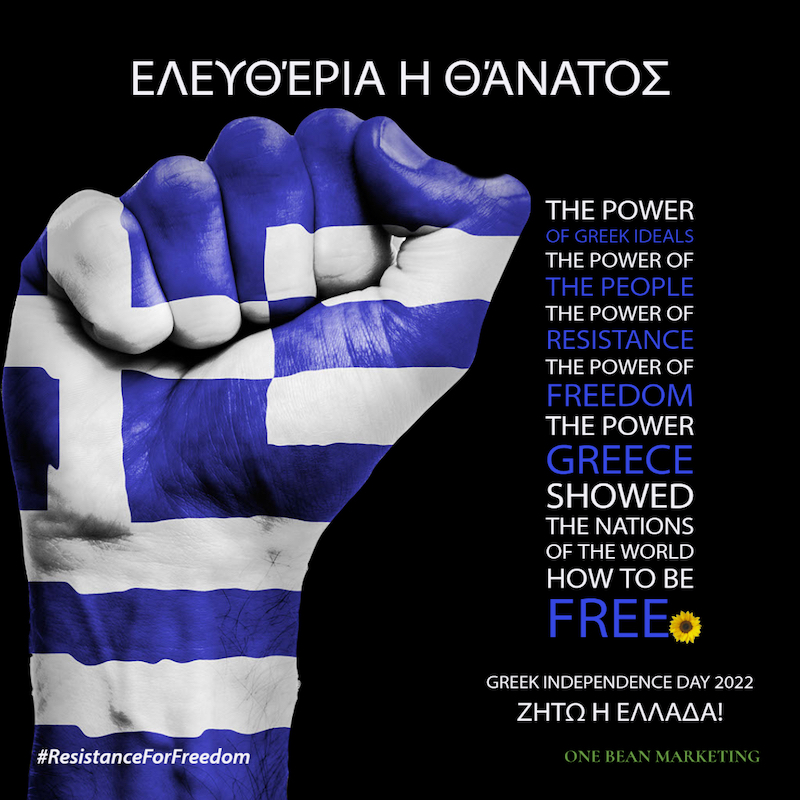 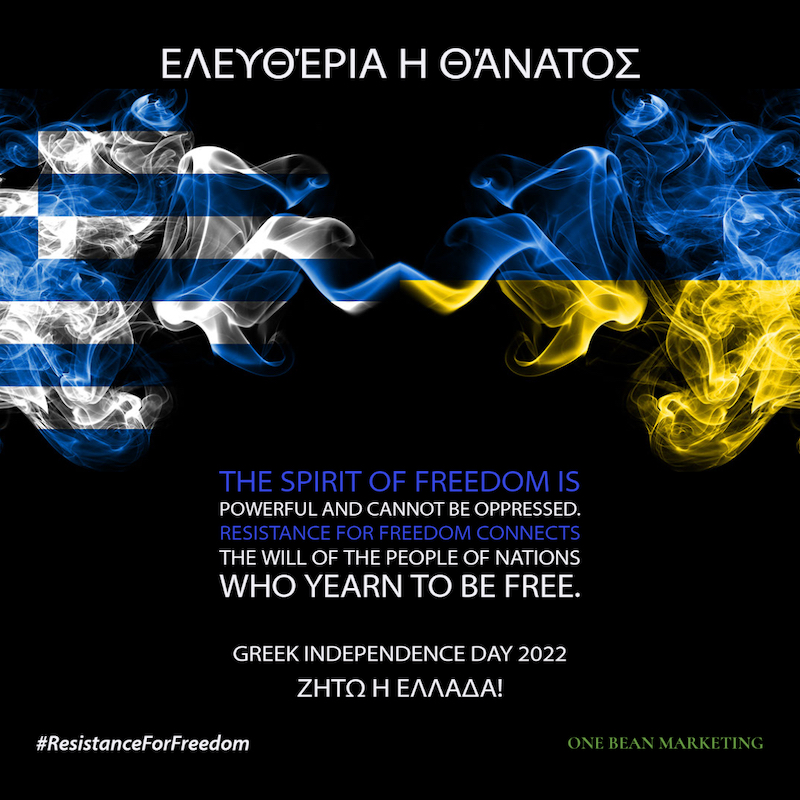 We are moved to share with you our #ResistanceForFreedom campaign honoring and celebrating March 25, 2022 – Greek Independence Day – and showing our support to the Ukrainian people as they fight, in their own country, for the same Greek ideals of Freedom, Democracy, and Independence that Greece fought for over 200 years ago.

The #ResistanceForFreedom campaign speaks to not only to the Greeks throughout the world, but to all who support Freedom, Democracy, and Independence wherever they live. We believe this year in the current circumstances that are taking place on a global scale, Greek Independence and the history of Greece continues to inspire nations and people who are supporting #ResistanceForFreedom, the rallying cry of Ελευθέρια η θάνατος - "Freedom or Death".

One Bean Marketing invites you to share this campaign by downloading your favorite images, posting them on your social media platforms using the hashtag #ResistanceForFreedom and tagging One Bean Marketing. Let’s empower one another and unite to show our support for Freedom, Democracy and Independence. 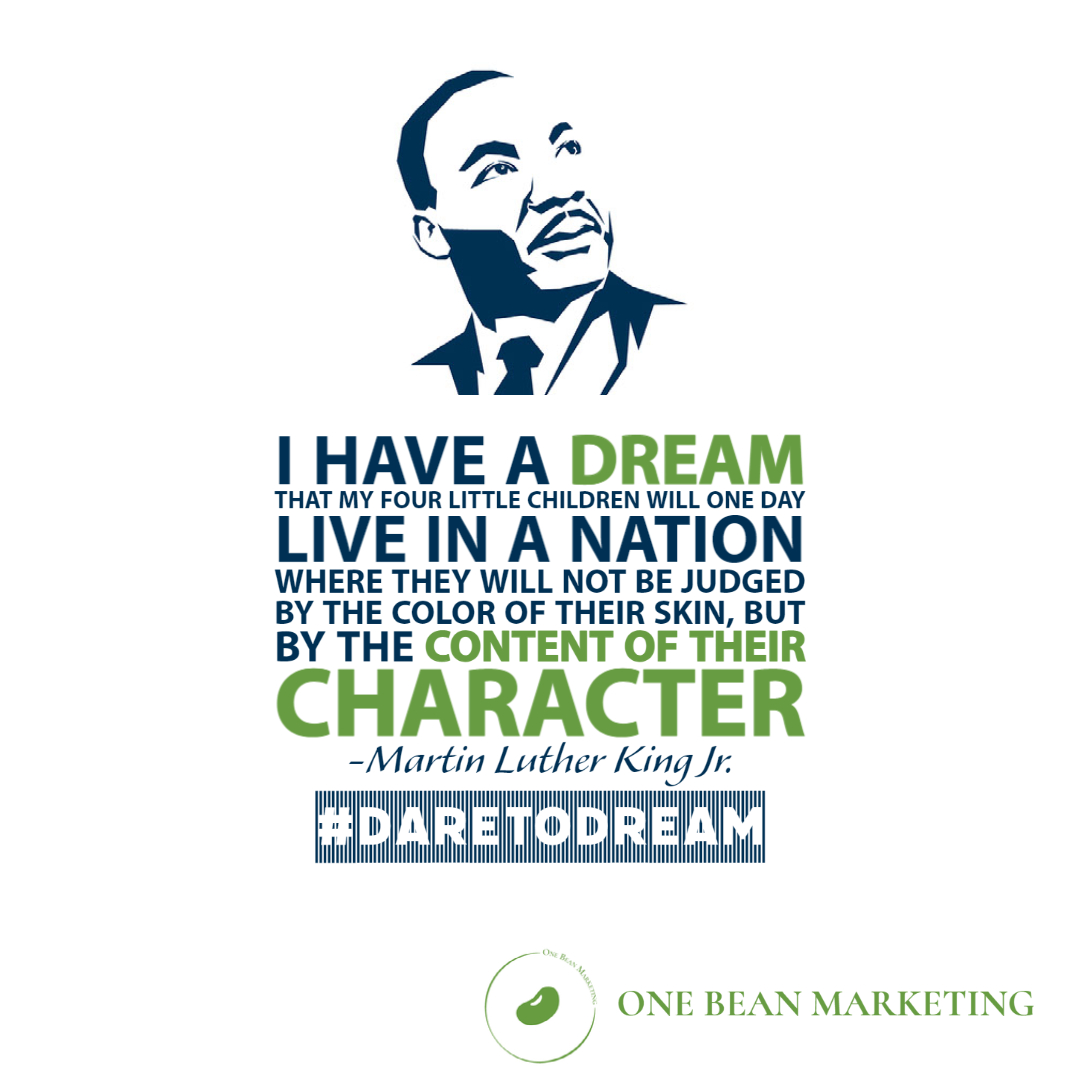 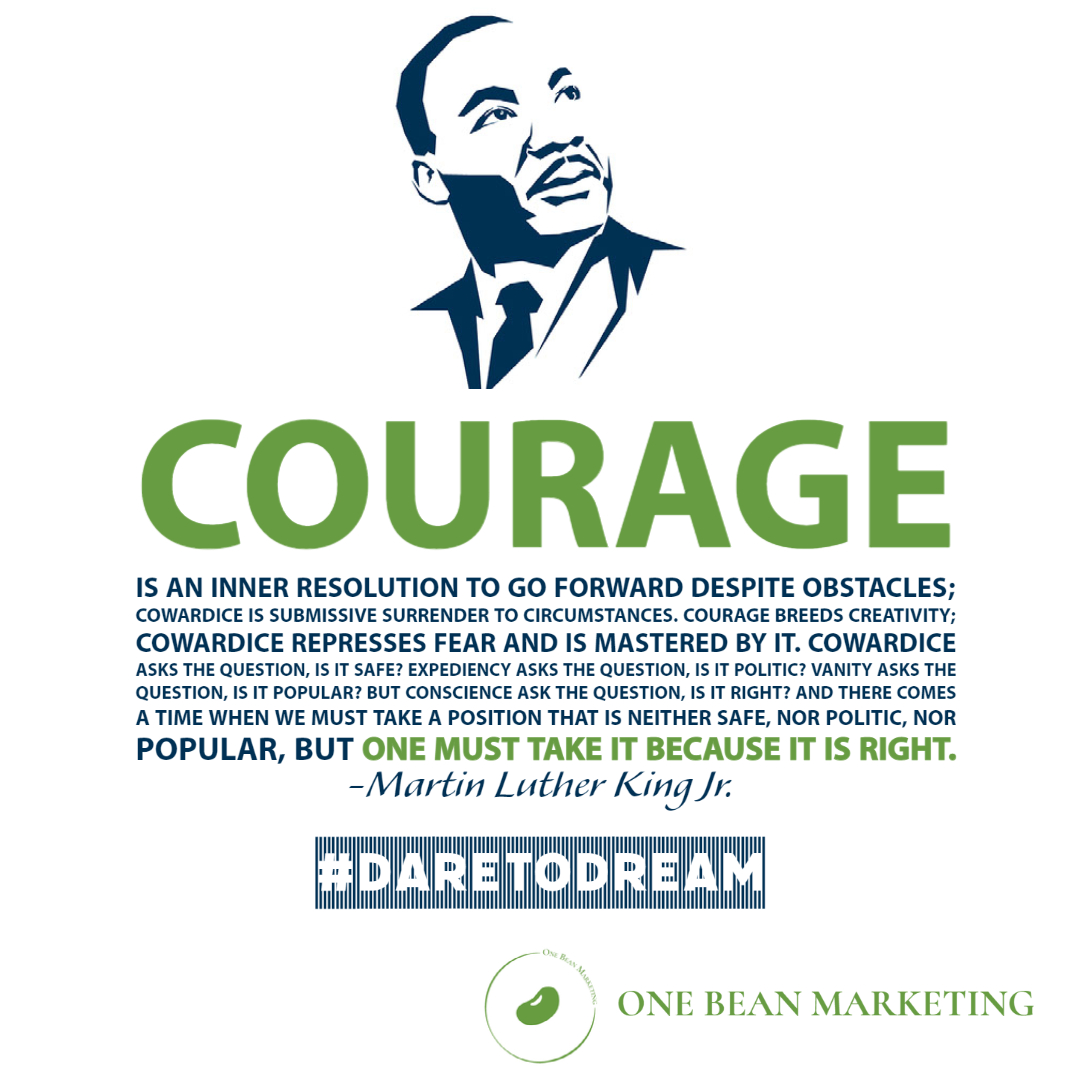 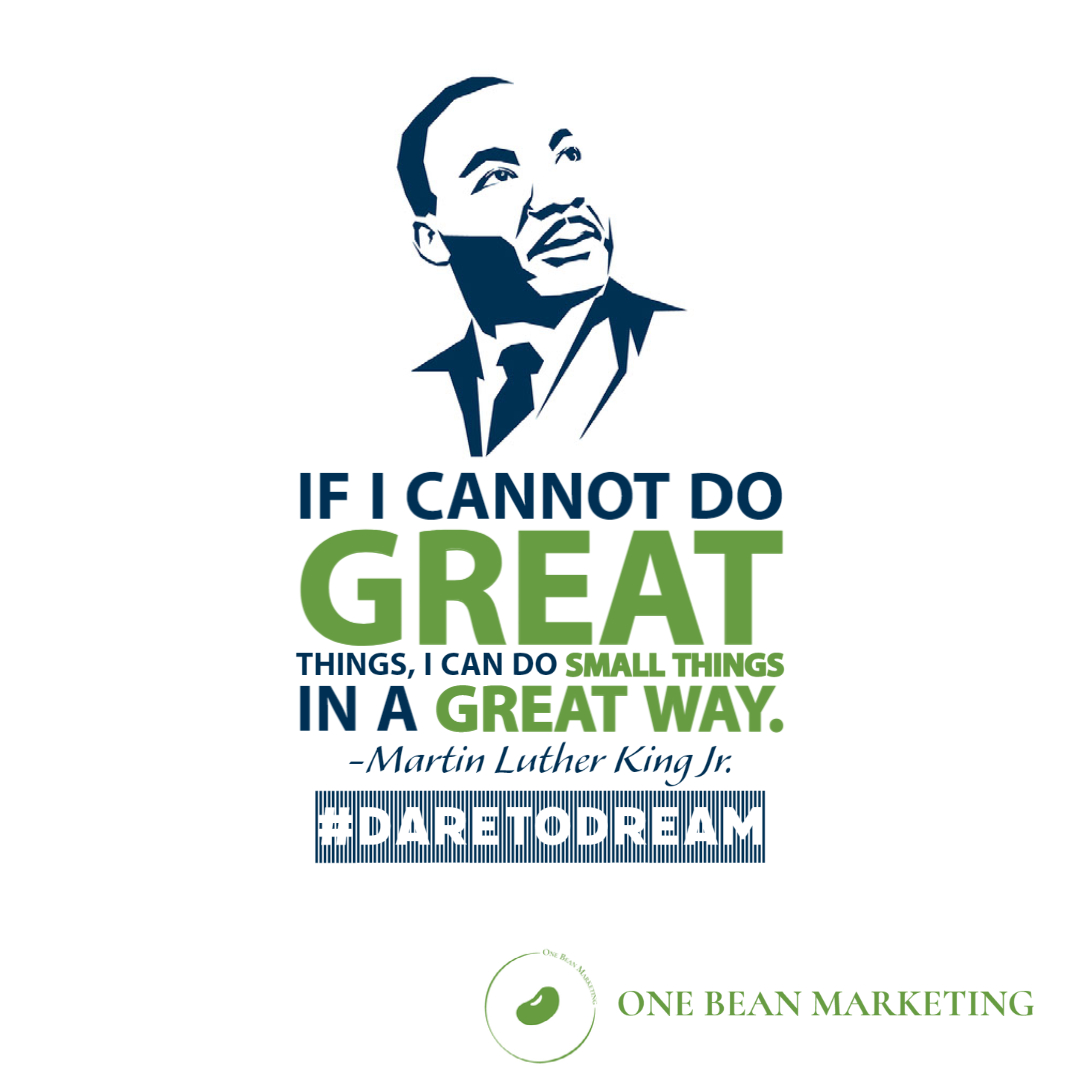 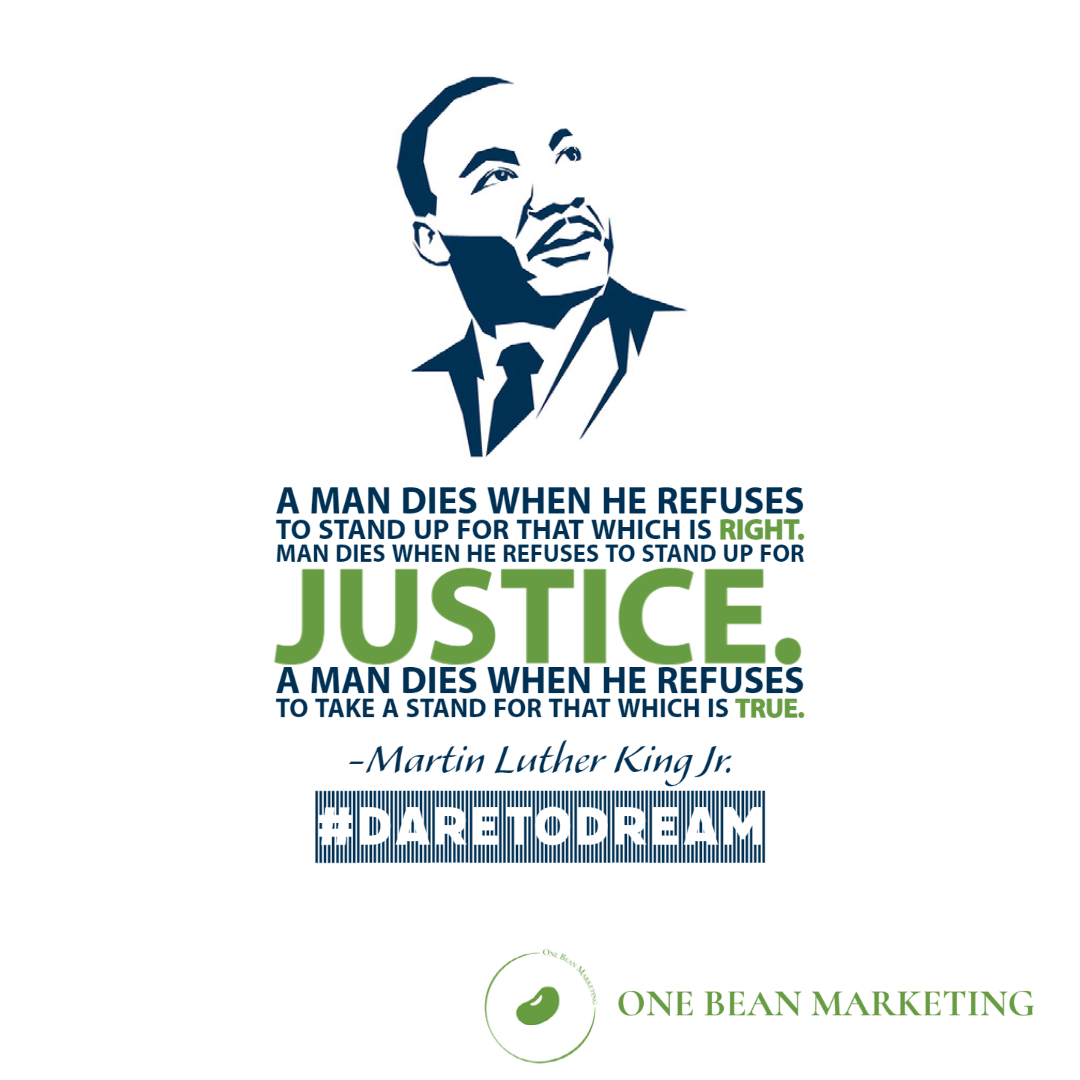 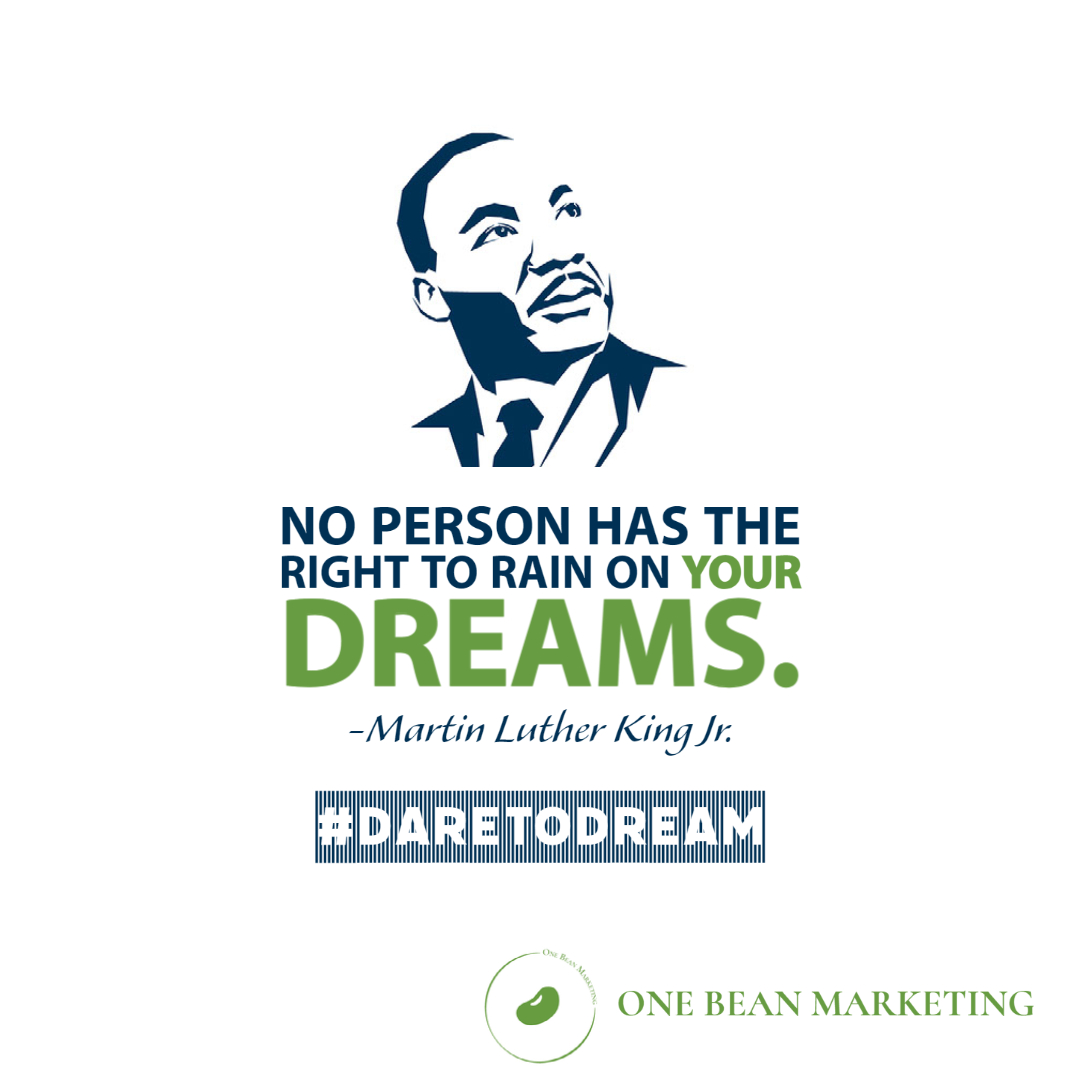 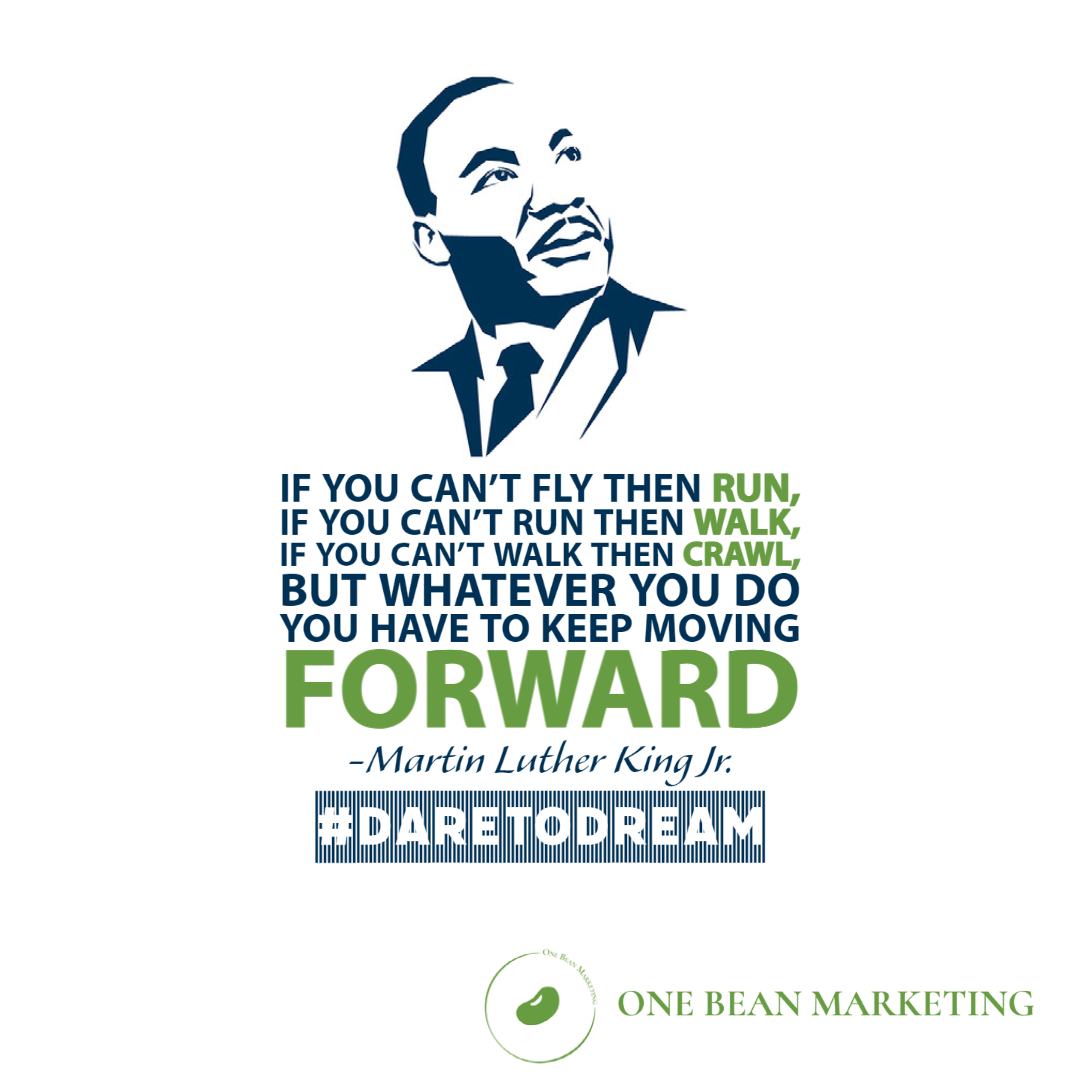 We are excited to share with you our #DareToDream campaign honoring and celebrating Dr. Martin Luther King Jr., and his legacy of service, community, empowerment, nonviolence, which inspired people and changed the world. One Bean Marketing invites you to share this campaign by downloading your favorite images, posting them on your social media accounts using the hashtag #DareToDream, and tagging One Bean Marketing. Let’s inspire one another and #DareToDream! 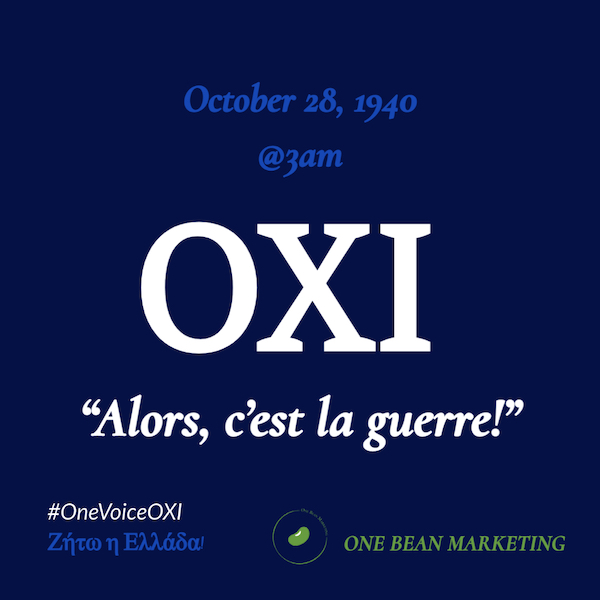 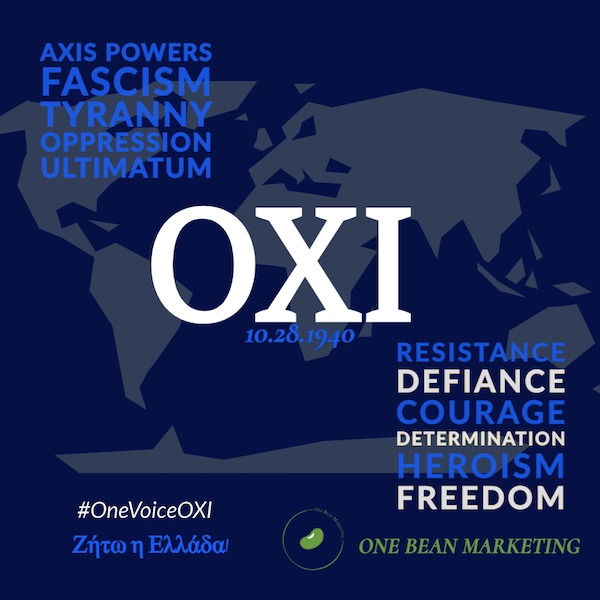 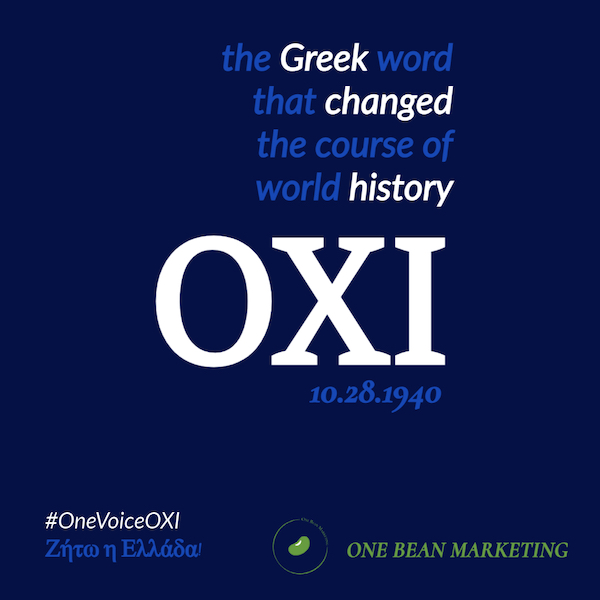 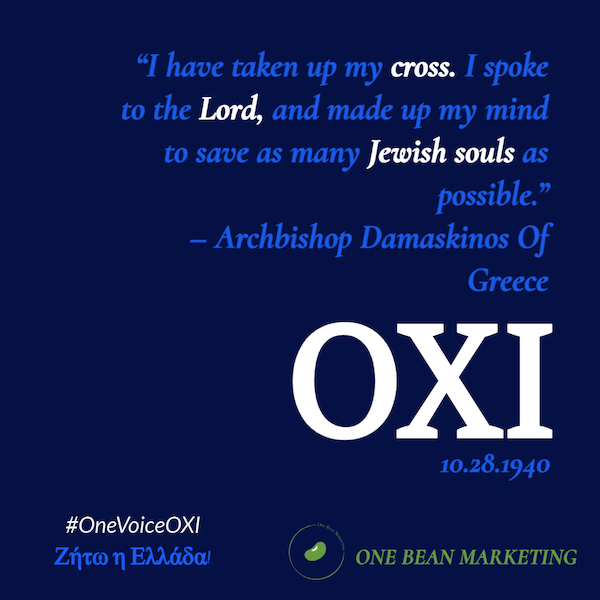 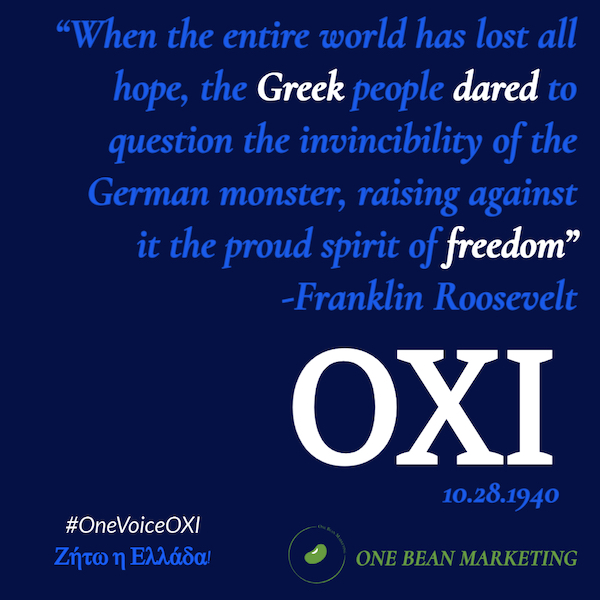 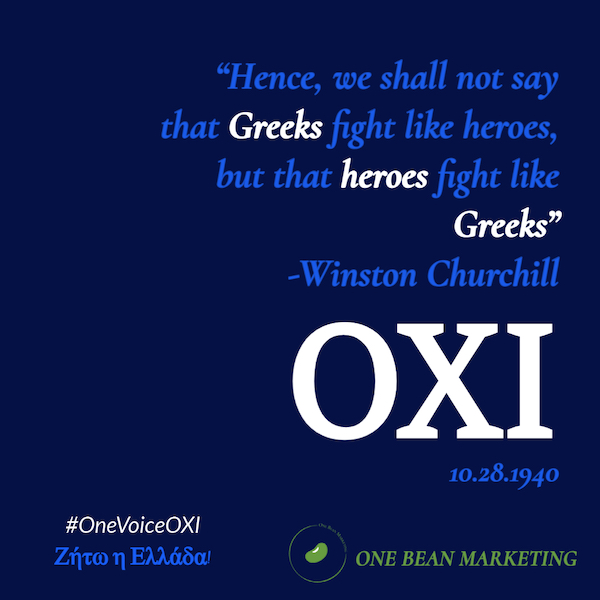 In the place where democracy was born, in the proud, courageous spirit of freedom, against all odds, Greece took an impossible stand and fought to keep freedom alive.

World War II was underway and countries around the world suffered under brutal occupation as Hitler and the Axis Powers stopped at nothing to secure their own interests.

On 28 October 1940 at 3am the Italian ambassador to Greece, Emanuele Grazzi, returned home from a party at the German Embassy in Athens and called the Greek Prime Minster, Ioannis Metaxas, delivering an ultimatum: allow the Axis powers to control and occupy key locations in Greece or the alternative is war.

Without hesitation Metaxas replied using the official diplomatic language of French: "Alors, c’est la guerre!” – Then, it is war!

In support of their Prime Minister's refusal, the Greek people took to the streets and spontaneously began chanting, “OXI!” – No!

Oxi Day, October 28th, now commemorates the day the Greek Prime Minister and all of Greece bravely said “ No” to fascism and entered into World War II, changing the trajectory that ultimately defeated Hitler and the Axis Powers.

One Bean Marketing invites you to celebrate Greek courage at that historic moment, uniting us with one voice to say, “OXI" by sharing this campaign on social media on October 28, 2021.

Download and post these images, tag us, and use the hashtag #OneVoiceOXI — to unite and inspire people around the world in the spirit of Greece: courage, democracy and freedom. Or repost and share them from our social media links. 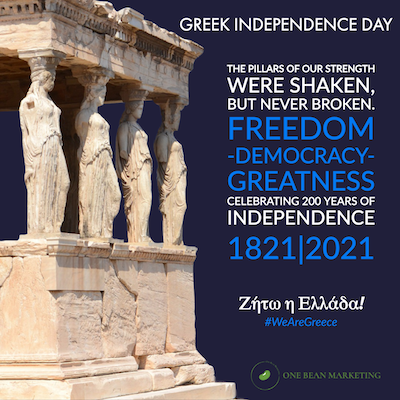 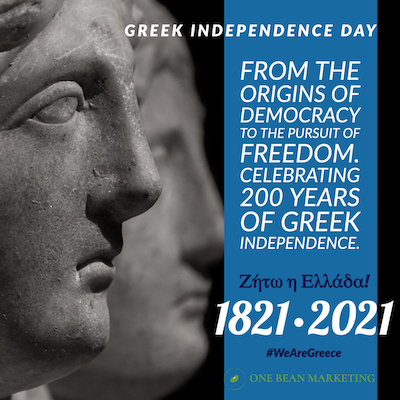 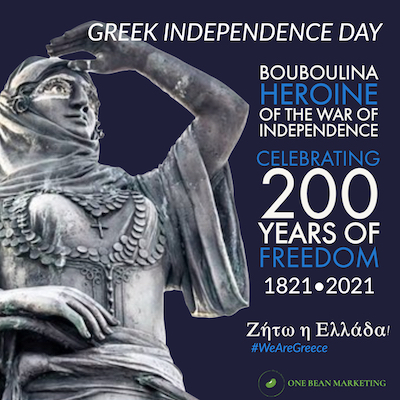 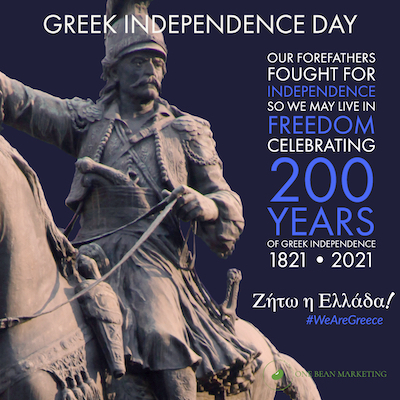 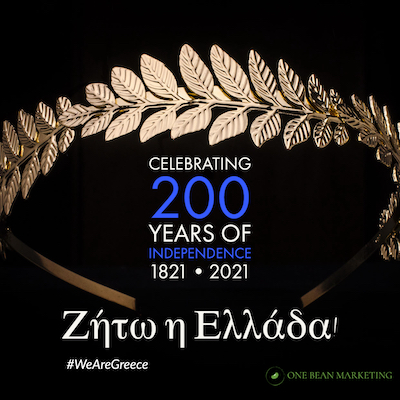 In celebration of the 200th Anniversary of Greece’s Independence, One Bean Marketing has created #WeAreGreece, a campaign to remember and promote the Greek ideals of democracy, freedom and independence to all corners of the globe. From ancient times, the people of Greece have made valuable contributions to humanity in the arts, sciences, philosophy, culture, technology and industry. After centuries of oppression, Greeks changed the course of their history, and fought for their Independence.

#WeAreGreece speaks to those who are from Greece, those who love Greece, and those who support Greece — uniting us all in the spirit of the ancient past, the dynamic present, and hope for the future, for generations to come. We believe that on this 200th Anniversary of Greek Independence, the story of Greece continues to inspire, is larger than life, and, as the rallying cry, “Ζήτω η Ελλάδα!” assures us, will never die.

Celebrate with us by sharing our campaign!

Celebrate the story of 200 years of Greek Independence via social media by downloading and posting these images along with the hashtag #WeAreGreece — to unite people around the world in the spirit of Greece: democracy, freedom and independence. Or repost and share them from our social media links    .

Want your own branded #WeAreGreece image to post for your business or for your personal pages? Contact us for more information.

Do you have an awareness, advertising or marketing campaign you need help developing? One Bean Marketing would love to hear from you. We work with businesses, organizations and individuals in the areas of business development, branding, social media marketing and messaging.

Email angie@onebeanmarketing.com or call us at 917.535.8826 to start the conversation!